I have been using the Nutanix Virtual Computing Platform 3450 and 3460 appliances on some of my recent projects.  I have been wanting to do some testing to see what these appliances are capable of, I mean other than hosting 5000+ VMware View desktops, but it’s not like I can just go pull one out of production and fire up IOMeter, or install Hyper-V on it, or do some What-If-BadThingsTM happen like a hard drive accidently getting pulled or two nodes decide to power off at the same time.

Nutanix was kind enough to send me a Nutanix 1350 Virtual Computing Platform appliance to do exactly this.  The 1000 series is the little brother to the 3000 series.  Without having received Nutanix Official Sales Training(TM) I should clarify what the series numbers mean:

Nutanix had also warned me that the appliance is rated to consume 1150W at 10-12A.  With all of the other equipment that I have in the office, my 15A circuit didn’t look like it was going to cut it.  Time for a power upgrade!

However, something seemed to be missing to complete this power upgrade… attic access!  5 days, 10 trips to Home Depot, a stud finder, 1 new reciprocating saw, and 4 holes in the wall later I had finally installed a new 20A circuit!

Found the back of the electrical panel! 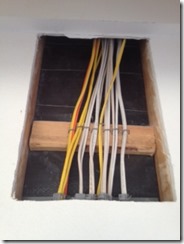 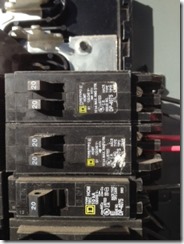 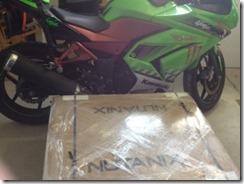 Even though it came with rails, I don’t feel like moving everything around in my lab rack, I want to play!  I’ll just set it on top and rack it later. 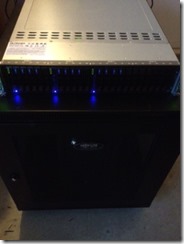 However, I plugged in my Kill-A-Watt meter and it shows me that these 3 nodes are only consuming 367 Watts.  At 0.367 kw/hr * 24 hrs per day * 30 days per month * $0.31, it looks like I’m only going to be paying an additional $81.91.  I realize that these numbers are at idle, so I’ll have to write another post once I get a load spun up.  Also, this load probably could have fit on my existing 15A circuit.  But at least I got to play Tim Taylor over the holiday break and get more power! 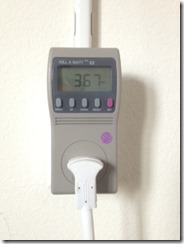